The Shadow, for the Who Contest prompt 'Scream' and four HC Bingo prompts

who_contest rompt ‘Scream’ and the hc_bingo prompts 'Restrained', 'Sacrifice', 'Parting ways' and 'Nightmares'.
Summary: ‘She would open her mouth to call out to them, or to whisper, and would close it again, the silence around her undisturbed by her presence.’ 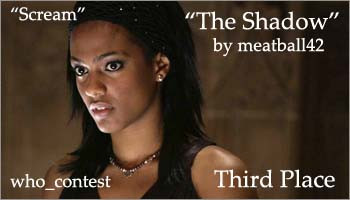 She saw so many things, atrocities that made her want to cry. Toclafane tearing up frightened, defenseless people. Humans turned against their own kind for false promises from a madman. She wanted to shout at them, to demand better of them.

She saw things that made her want to laugh, and hug people, and dance, because they were so brilliant. She saw people help each other when they had nothing to give, saw bravery and sacrifice and hope during the darkest times she could ever imagine.

And she walked away.

She never stayed. Never celebrated the tiny victories of sabotage and survival, never stayed to mourn or rebuild or try to heal the shatters of lives she left behind. She walked on, ran on, sometimes, in silence.

Martha would look up at the sky, where maybe, just maybe, she and the Doctor were looking down from the Tardis after all this was sorted out. And she would open her mouth to call out to them, or to whisper, and would close it again, the silence around her undisturbed by her presence.

She couldn’t afford to make noise. The Tardis key meant the Toclafane couldn’t see her, but they could still hear her.

Martha told the story of the Doctor to everyone she could, hiding the stifled screams inside her as the darkness became complete. She traveled mostly at night, going to ground at the first rays of lightness in the sky. The only sounds she heard for days at a time were her own footsteps, on gravel, on grass, the wind through the countryside, the far-off buzzing of those metal demons in the air. Her voice grew raspy, and the only time she used it was to whisper the story around hidden lamps in the dead of the night.

After. The change was so abrupt. Two days before she’d been walking in the silence, and now she was back on the Tardis with the Doctor. She’d been used to that, a year ago, but she was out of practice and now she walked around the Tardis, listening to its humming, feeling like this wasn’t quite real.

She went to sleep in a room that wasn’t hers anymore and woke up with her own hands clamped over her mouth to hold in a scream. The door flew open and someone rushed in. She squeezed her eyes shut against the light from the corridor, but the man’s hands were gentle and his voice soft. “It’s okay, you’re safe now, it’s over.”

She shuddered at the warmth of him, and he carefully tried to pull her hands away from her face. She shook again, and he made shushing noises. “I understand. It’s over, you don’t have to hide anymore.”

She gasped and cried as she let the air out. She heaved another breath and screamed, burying her face in his neck. He held her tightly, though she must have been shouting in his ear, and she lost her sense of time as she let out all the silent screams that had stayed inside her for those never-ending days and weeks and months.

When she was at last breathing normally again, throat destroyed, body weak and trembling, she looked up at the doorway. The Doctor watched her, face an emotionless mask, as she shook in Jack’s arms.

The man she barely knew comforted her, while the man she loved, the one who’d told her how to walk the Earth, watched her.

It had not been for nothing that she’d spent a year alone. Martha knew she wouldn’t be going back to pretending again, playing the part of someone who was wanted and happy.

She drifted into the blackness of sleep, embracing the silence with open arms.